The angle formed between the end-points of the arc and a point is said to be the angle subtended by the arc at that point.
We are mostly interested in angles subtended by an arc at the center of the circle, and to any point on the circumference. 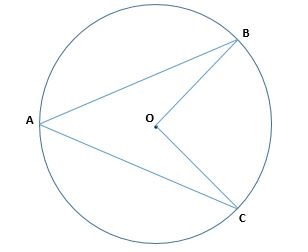 From the figure above, O is the center of the circle. Minor arc BC subtends angle BOC at the center.
The same minor arc subtends an angle BAC at point A on the circumference.
Angle BOC = 2*Angle BAC

In the above figure, AOB is a diameter of the circle. A and B are diametrically opposite points on the circumference.
C and D are any arbitrary points on arc ACDB, which is a semi-circle.
Now, angle ACB, and angle ADB are both right angles, i.e. each measures 90°.


By continuing to use this website, you acknowledge that this service is provided as is, with no warranty of any kind whatsoever.
Copyright 2015 ChiPrime. All rights reserved.